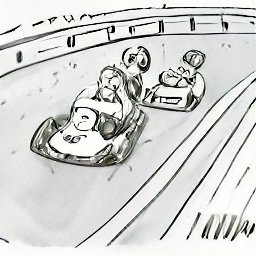 I recently began playing the Blizzard online Collectible Card Game (CCG), HearthStone: Hereos of Warcraft. As a Magic: The Gathering (MtG) player from decades ago I'm enjoying the experience. Blizzard's take on the genre is a beautifully polished distillation of the genre's mechanics.

One of those mechanics, and a favorite of mine, is aggro. With an aggro deck a player attempts to accomplish an objective in as little time as possible. All deck cards are tailored to accelerate a desired outcome. Not only are aggro decks simple, in principle, to understand. I enjoy them because the accelerated outcomes result in being able to play more in the same amount of time.

With my family, time is a premium commodity. "If an aggro approach to a CCG works well," I thought, "what would it be like if I did the same to my entertainment? What if the cards are the technologies available? What would a 'happiness aggro' approach to the game of life's entertainment look like?" Muttering to myself, I began constructing.

Google's Priority Inbox should be a technology ace-in-the-hole: take the cruddy task of wading through emails and only show the best stuff. Put another way, increase my happiness by separating the chaff from the wheat for me. But it fails as a time saver for several reasons. First, I can't shake the nagging feeling that I'm missing something if I'm not seeing everything, and end up looking at the default inbox anyway. Second, crap still does get through that saps my time. Third, time savings for the Priority Inbox are difficult to quantify over the regular Inbox, so I don't feel aggro. With email, I'm still looking for a better card to play.

I've had more success with the podcasts I enjoy. I was having difficulty finding time to enjoy a number that I've become fond of. Normally I listen during walks over my lunch break. But during winter that isn't always possible. Instead of abandoning some of my favorite sources of inspiration until next spring I have, instead, multi-tasked my morning prep time. I take around twenty minutes getting ready each day (the new three S's: Social media, Shave, and a Shower). Over a week that's two hours. To play podcasts, I use BeyondPod, a podcatcher for Android. It allows me to set a custom playback speed. When enabled, those two hours of media time are actually closer to three with no sacrifices to my other activities.

I also recently subscribed to Aereo. It takes the TV channels available over the air and makes them available for streaming online. One of the benefits, besides not having to contort rabbit ears every time the channel is changed, is their "cloud DVR". As users of TiVo have been extolling for years, time-shifted television is a magical thing. But the real aggro virtue is being able to skip commercials.

I love the NFL. But a typical game not only has the same, repetitive ads for the same cars and alcohol. Much of the game itself is commentary and infographics of questionable interest interspersed between the action. A DVR does away with that. For the recent NFC and AFC championship games I watched six-and-a-half hours of scheduled game time in just over four hours. I didn't miss any of the action (or at least the action that people care about). And now I had over two hours back that would have previously been spent molding the couch to my derriere.

It's not all beer and Beast-mode Skittles. For one, DVR'ing a cultural event puts you at risk of spoilers. And there is something amazingly fun when a community rallies for a second-screen hash-tag rapture. Those experiences (ala Sharknado or the upcoming Super Bowl's #AdBowl) have to be real time. And happiness aggro isn't about fast forwarding through experiences. Gaining a breadth of experiences while sacrificing depth isn't the point.

It takes work. One has to identify what's fun about the entirety of an experience and maximize only that while minimizing the rest. Selecting the technology to build a deck of approaches, and then constantly refining those, requires a degree of self awareness. But, when successful, a happiness aggro approach to entertainment means one can have the same amount of enjoyment in less time. Who wouldn't be entertained by that?

Update 2014-01-31
David Armano: Super Bowl "A Moment of Truth" for Real-Time
WIRED asked if people would be using social media as a "second screen" during the big game. More than 80% of respondents said 'yes'.