Chuck Duppong, a fellow polyglot developer, has been capturing his frustration with job hunting in some fantastic posts. His first, captures just how ridiculous some "must-haves" within job listings are. The second is on the paradox of the "rockstar developer". Having recently come off a job with it's own ups and downs, I can relate. But, as a recent piece points out, there are four jobs open for every developer. Software job hunting should be easy. So why do recruiters make this harder than it has to be?

It is easier to harass every developer than to find the right developer. — Four Things that Make Job Hunting for Developers Hell

There's volume, for one. There are software recruiters who takes the time to understand what a company needs and how that might align with a developer's wishes. (Dylan Thompson, from Cypress HCM in Atlanta, was an absolute pro to work with. It's also been a few years, but I've got a ton of respect for Robert Merrill out of Salt Lake/Provo.) However, for every Dylan and Robert, there are another twelve (twelve-dozen?) throwing as many warm bodies at a position as possible. In a recent, fantastic experiment, a faked LinkedIn profile averaged a recruiter ping every 40 hours and saw 530 emails from 382 recruiters across 172 organizations. In this game, candidates are scratch tickets: the more a recruiter plays the more likely they are to get lucky and win. Unsurprising, that rubs programmers the wrong way.

Even if external, 3rd-party, recruiters were to slow down and vet each candidate, I doubt they'd be able to. They are responsible for filling numerous opportunities across as gamut of industries. Even a seasoned technology veteran would be hard pressed to have the depth of experience to understand what they were hiring for at any more than a superficial level. And if their chops were really up to snuff, they'd be earning the salaries developers can earn themselves. This, then, results in the ridiculous keyword bingo I've so often seen. 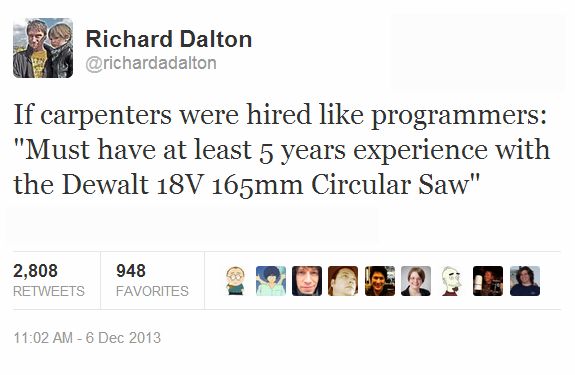 In one particularly cringe-worthy phone interview, the recruiter ran down a list of acronyms they had in their internal application form. The list became increasingly obtuse until she asked how many years I had developed "open source". I realized that, in her mind, there wasn't any differentiation between a programming language like Python and a licensing approach. When the understanding doesn't extend beyond a list of check boxes with funny sounding names, there's little hope for the pre-screening process to be meaningful. And we can forget about being able to recognize and recommend related, relevant experience; no keyword, no interview. (This is also the same recruiter who emailed asking if I wanted pursue some new opportunitites only two weeks after I sent a very polite note thanking her for her time and telling her I had taken a position somewhere else. So maybe she's not the best example.)

They final thing that bothers me about the broken process is maybe minor, but drives me nuts: the lengths to which recruiters go to obscure the hiring company. Their fear is that, once a candidate knows the business behind the curtain they'll approach them directly; leaving the recruiter who did the matchmaking without their bounty. That leads to ridiculous emails that sound more like terms of service than the delicate, emotional conversation that job hunting is:

Return of this email confirms that Matthew Reinbold, has given XXXX, Inc., A YYYYY Company, the sole and exclusive right to represent you for a "Developer" at "ZZZZZ". Any other company which submits my name or resume for such assignments at this client has done so without my authorization and consent. Additionally, I agree that I will not disclose the end-client in which I am being submitted to by XXXX, Inc. Disclosing this information may remove me from consideration for the position. Can you please reply with 'I Approve'?

But finding a cultural fit is huge. There are places I wouldn't approach with a fifty-foot Ethernet cable. Other places either don't provide the amenities or career path I expect. If I knew, up front, who the opportunity was with I would have been able to save everyone involved plenty of time.

And it's not just for the candidate's benefit. A company using a recruiter can't sell it's workplace benefits. It can't leverage its public awareness to attract the kind of talent that might be drawn to it. It remains anonymous until the point when both sides have been legally bound not to perform any backroom shenanigans; a point at which all sides have likely invested numerous hours.

Despite some noble efforts, I don't see the situation changing anytime soon. The tools make it too easy to flood developer channels with unsolicited offers (deleting your LinkedIn account seems like an extreme measure driven by an extreme imbalance). The fire hose approach eschews understanding or depth. The incentives reward ambiguity and lack of job specifics.

In my perfect world companies would be actively grooming talent prior to needing it. The would not only be active participants but community organizers. Done this way, when it came to hiring, a company would already be familiar with the potential available.

It takes an extraordinary manager and/or organization to shoulder that kind of burden when the immediate Return-On-Investment (ROI) is unclear. But just because it takes effort doesn't mean it's not worth doing. A development team shouldn't cede the responsibility for their future coworkers to external parties. Programmers shouldn't shirk interacting with other people because it's a soft, squishy skill they never bothered to develop. The health of any ecosystem, like the available talent pool, is the responsibility of those that dwell in it.