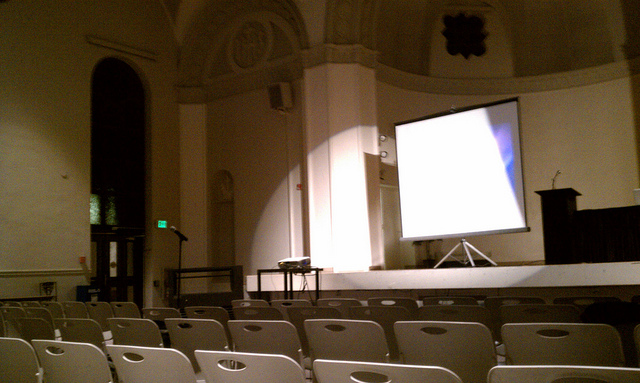 People have been writing, in one form or another, since crude cave paintings. Even with all the time that has transpired since, people still get together and talk about recording words. But have you ever heard of a typewriter user group (at least, one outside of yesteryear romantics pining for community's sake)?

With any emerging technology people need to gather and evangelize this new thing. Personal computers weren't always obvious. Enthusiasts like the Homebrew Computer Club had to meet to celebrate the concept. They gathered to support each other, clarify the vision of what they're doing, and share best practices as they are being developed. This commiserating bolsters the faithful. It reinforces that the view from atop the plateau is worth the effort to push a rock up the S-curve.

The people who gather and babble, gobsmacked, at the potential of these widely adopted tools has regressed to something statistically insignificant. The pioneers are no longer needed. The line which those tools have gone from magical to mundane has been crossed. After that threshold people talk more about what they're doing and less about what they're doing it on.

"Mobile" is at that point now. Every successive release of the iPhone is evolutionary, not revolutionary. Android doesn't paint a new picture, but layers on new functionality on an increasingly rich collage. Forget the phone; even the web is now just an app. People are no longer sharing the transformative power of having a computer about their person at all times. The technology is no longer a shiny badge for achieving a level of gadget sophistication. Nobody coos in rapture on the sidewalk while staring lovingly at their gorilla glass. It's now the stuff of everyday. It's a speed bump to something else.

What are the ramifications of a technology that has arrived at where mobile is now? The growth slows. It is no longer the wild west, and the gold rush is over. Saturation takes hold. For new entries, differentiation takes an increasing number of cycles. That is probably a good thing. There's something embarrassing about working in an industry when developers are dueling to become the next fart app millionaire.

As said in boardrooms the world over, "We need a mobile strategy" is wrong. The statement always put an emphasis on the medium over the value proposition for the customer. Today, however, it's a dead end. Paying lip service to the medium is no longer even a press-release worthy novelty. ("ACME CO RELEASES APP" is to 2013 what "ACME CO IS NOW ONLINE" was in 2001 — a yawner.) Everybody releases apps. Everybody should have approaches for dealing with the web on unpredictable screen sizes. It is what you do for people on those platforms that matters. Hopefully, for your organization, how you make your customer's lives better is an easier question to answer than which app store you should upload to.

The death of the mobile movement isn't all bad. It means that tooling for the space is getting serious investment. It means a greater number of practiced, wisen craftsmen are lending their years of experience to making the experience better. It means being able to do a search on Google and finding relevant results. It means we can get on with the serious business of getting better rather than just getting on.

I used to attend a number of mobile-focused groups. Meetup.com still regularly kicks out meeting invites for related events. I have difficulty mustering more than a meh. I don't need a pep rally anymore. Mobile, as a movement, is dead to me. Mobility lives everywhere.

So I Am Making an App