How do you figure out where an NFL team's fan live? Why, abusing the privacy settings on Facebook, of course! 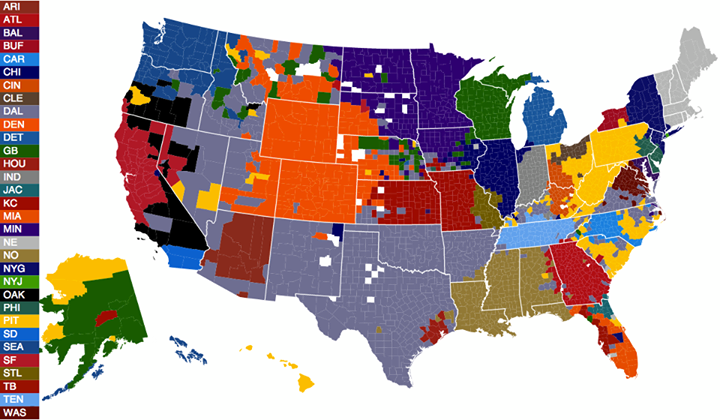 Assembled by Sean Taylor, the methodology for assembling the map is straightforward. Each of the league's 32 teams have a Facebook fan page that users can follow. Identifying the followers, he then went through and catalogued where each of those fans live. Color coding each area based on the predominance of likes and, viola! the geographically dominant teams became apparent.

There were some interesting takeaways. For example:

"Some teams, like the Steelers, Cowboys, and Packers, seem to transcend geography, with pockets of fans all over the country."

"No matter which team you root for, it's pretty likely you'll have a friend who is Cowboys or Steelers fan, which is maybe unsurprising given their country-wide support"

For most, this would just be an odd curiosity. However, for someone like me that trades NFL memorabilia, this is actionable intel. I try to ensure I have a mix of different team items; the frequency with which people move for work combined with greater exposure through new media options like Sunday Ticket and Red Zone channels mean you might meet a fan of anyone anywhere. But if pressed for space I skew toward Steelers, Cowboys, and Packers. Jets and Jaguars never do well. It's not just because they've had lackluster seasons. Looking at the map it would appear it is also because their fan bases are so geographically concentrated in places not named Denver.

It is also worth pointing out that confabulating geographical area with team popularity would be a mistake. While the Minnesota Vikings purple certainly covers a hearty swatch of the upper plains, I can speak from experience that there aren't that many people there. Collecting items for resale based on the size of the geofence isn't properly gauging the audience size.

For those numbers, the Harvard College Sports Analysis Collective have more conclusive results. The actual top ten by size are: 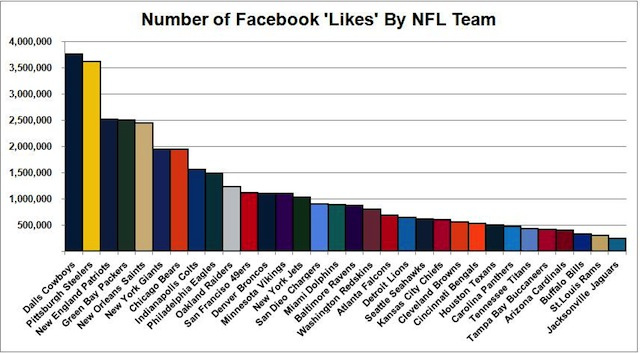 The graphic exhibits the classic "long tail" seen in most popularity rankings. The Steelers have more than a million more Facebook likes than the Patriots despite only being one spot ahead of them. The graph is very top heavy.

Another notable observation is that every team that has won a Superbowl in the last 10 years has at least 1.5 million Facebook likes. Translated to collector strategy, collect winners. In my case, I put the brakes on Broncos and started gathering Ravens after they beat Denver in last year's playoffs.

All of this is extremely seasonal, but that is another post. With luck, I hope to be taking a more in-depth look at code and stats as they apply to America's favorite sport. Sit back, relax, and enjoy the return of the NFL season this evening!

NFL and the IoT

The Fandemonium that Binds