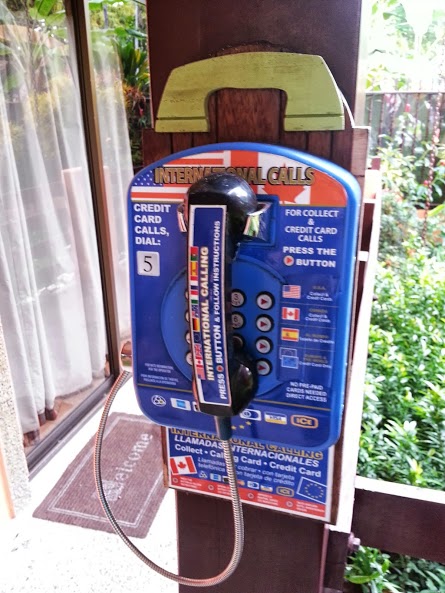 It's amazing how many people either don't get or accept that programming isn't communicating with computers, it's communicating through them.

I work in an industry that, for a large part, is about amplifying signals. I do Internet work in the name of making voices heard. However, in the process, it is all together too easy to add to an already deafening cacophony; "ONE SURPRISING TRICK!", "SALE THIS TUESDAY", "LOG IN NOW". It is even easy to forget the ridiculous volume of those screaming for our attention until we become reacquainted with silence. For my wife and I, that silence came when we opt'd to forgo our mobile phones in Costa Rica.

At $0.50 a text message, $3.00 a minute for a call, and over $20 per MB for data, it wasn't realistic to continue to use our own phones while roaming. We had looked into phone rentals and switching SIM cards for a local number, but both seemed like an unnecessary hassle. We used VOIP (Google Hangout, Skpye, and Voxer) over satellite Internet while at the vacation rental house. If we weren't at the house... well, we were probably off doing more meaningful things than reviewing our Pinterest boards.

That worked well for several weeks. I missed having turn-by-turn navigation in the car. It was an odd feeling readjusting to finding our way around using a paper map. Waiting to update Facebook and Twitter until we returned home was surprisingly beneficial. We couldn't flood those channels with streams of in-the-moment (but of debatable interest) updates. Instead, the delay meant updates were more thought out, clearer, and more concise. Email had to wait to be done in batches. The reality of the situation had conquered the habitual itch to check that my brain, for years, hadn't.

I was not only in a tropical paradise; I had reached a data nirvana where an incessantly chattering world had been put into balance with a quiet, reflective inner one. It was beautiful.

Until my daughter cut her head open and needed stitches.

My wife, the only member of our family with anything approaching functional Spanish, left for the hospital. She took our daughter to San Ramon with a vague idea of where to go and a car full of best intentions.

I noticed the first hour go by. I didn't think much of it; I was busy getting dinner ready for my other two kids. After the second hour I began to become uneasy. San Ramon is only a ten minute drive away. Even with a language barrier and an emergency room stop, things shouldn't be that bad, should they? Was there a car accident? Was the hospital in a bad part of town? Were there problems with the paperwork? On the third hour the disaster scenarios had expanded - what if they had to drive to San Jose, another hour away?

The problem I have with not knowing is I don't know when to stop. The more I turned the problem over in my head the more dire the situation became. Each tick of the clock reinforced my worst fears about being alone in a strange place where I didn't speak the language. There was no local number for me to call and no wifi in the hospital for my wife to email back. As the sun set I was left, literally, in the dark.

I have conflated the popup toast for the heartfelt ping of real human emotion. I feel a warn glow of popularity when a 160 character missive fires my way. I've thrown status updates out like bait on a hook, fishing for a response to bite. I could easily mute or time shift all of that. However, that night I would have gladly paid any price for the truth: "She's ok. Two stitches. We're getting ice cream and will be back soon."

As the builder of things we have to remember - more than proving how clever we are, more than attracting a big exit, more than establishing institutions that will outlive us - that we are creating bridges. Like a bridge, we have to maintain the structural integrity. We need to facilitate people to responsibly cross it. And, if we're no longer providing the shortest distance between two people, we should recognize that it's time to build something else.

Those connections give our work meaning and remembering why gives technology direction. When I sit to consider a project now, I reflect on what bridge I might be building. With the tremendous amount of noise competing for attention, that is a clear signal for what is worth doing.

Not All Who Wander Are Lost

Lament of the Lone Coder