On March 4th, 2010, sick and addled from cold medicine, I gave an Ignite Salt Lake talk to several hundred people. For those unfamiliar with the format, speakers are given twenty slides that auto-advance every fifteen seconds. In the resulting five minutes people share what they're passionate about. In early 2010 the economy was still mired under the weight of financial and housing crises. I was obsessed with seeing a new series of resilient systems emerge from the fear and trepidation.

I stated then that trying to cram so many big ideas into such a brief talk was a mistake. That remains the case. But three years later I'm also embarrassed by my earnestness. A typical day includes exhausting all energy at work, running kids to their events, maintaining a side business, and keeping a household running. That really only leaves enough time and energy for a good cry over my life choices before passing out to the Late Show. Not listed is all that fulfilling, change-the-world hard stuff. I oscillate between peace over the compromises I've made for a stable, prosperous home and shame that I haven't helped advance a healthier agenda. Everyone faces these tradeoffs. For me to stand on stage and petition people to find their tribe when I've done anything but was disingenuous.

But hey, they are some pretty slides that I spent a fair amount of brain cycles on. At a minimum, they represent a constant struggle I have between an idealized fruit and the sucralose result of my labor. From the vault, here is an abridged portion of my notes. 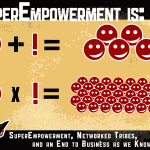 A person is empowered when they are able to effect those immediately around them. Super empowerment is when those same individuals motivated by the same ideas are able to affect a disproportionately larger number of people. There is a force multiplication of their actions.

From ZenPundit: "To qualify as a super empowered individual, the actor must be able to initiate a destructive event, fundamentally with their own resources, that cascades systemically on a national, regional or global scale."

Also be sure to check out their larger exploration on the topic. 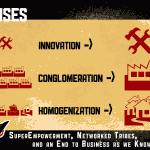 There are a number of reasons why we've seen the rise of the super empowered individual today: 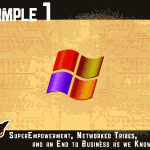 Malware in the Windows ecosystem is a case study of super empowerment factors. Hackers have gone from using simple exploits to nearly unidentifiable rootkits (innovation). Microsoft leveraged its industry clout to buy out or destroy competition (conglomeration). Even if businesses do not use Microsoft products they have to support its formats in order to do business with others thus providing an attack vector (homogenization). 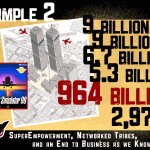 The attacks of 9-11 are another example of superempowerment. Nineteen individuals, trained on little more than cheaply available flight simulator games, were able to cause a force multiplier result:

Of course, that is nothing compared to the cost of the nearly 3000 individuals who died that day or the subsequent US military causalities after. The terrorists' cost included box cutters, a few boxes of software, and some plane tickets. 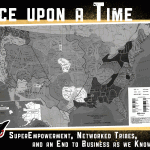 How do we lessen our vulnerability? When Christopher Columbus discovered America he didn't discover a 'King of the Americas'. What he found a diverse array loosely affiliated groups, all semi-autonomous (map of tribal territories from Wikipedia).

Tribal groups that adopted a centralized, hierarchical structure (like the Mayans) died out - the resources available couldn't scale to match that model. It's also worth mentioning that the common Hollywood portrayal of the "Chief" as being the unquestioned leader of a group is incorrect. Chiefs were almost entirely wise elders. They gave advice based on their experience but the tribe was not beholden to follow it. Even in leadership the tribal system was entirely unlike the hierarchical control structures of the coming Europeans. 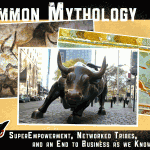 A tribe is the oldest and most successful organizational model ever conceived. Tribes create a sense of social identity that strengthenss the ability of both the individual and collective to survive. Tribes are:

Tribes promote kinship through their mythology - these are the sets of reoccurring symbols and narratives that set one tribe apart from another. 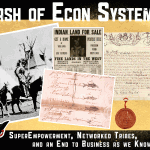 It would be a mistake to assume that the Old World systems swallowed those in the New because they were inherently better (things like land ownership, resource extraction, regimented command structures, etc). Instead, it was actually a form of biological super empowerment called smallpox - innovation at the viral level, a conglomeration of once disparate geographical areas through sea transportation, and a homogenization of the human immune system - that left tribes decimated and unable to compete. 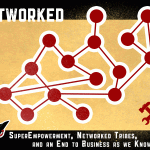 In light of our current problems it may be time to revisit tribal organizations. Networked technologies give scattered individuals the ability to coordinate and to organize. People are able to find those like them. They no longer have to submit to a singular global perception that does not align with their own personal belief system. 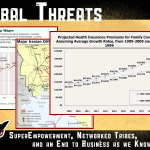 By breaking things into smaller subsets we can stop talking about systems that have grown "too big to fail" - systems that exact an enormous price because we are so deeply dependent on them. Instead, we have tribes which are "too small to fail"; that is, if things go bad entire countries and/or entire economies aren't wiped out because the risks taken were only those manageable by the group.

Numerous places are ripe for this diversification. 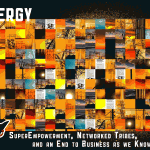 Your tribe may diversify energy. Our current centralized model makes it susceptible to failure; failure not only to technical problems but also financial exploitation. A tribe here may be committed to developing affordable systems for homes to be powered off-grid. Maybe they are dedicated to propagating information on how to obtain better electrical efficiencies. 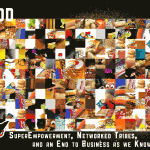 Maybe your tribe's belief system is catered around the production and distribution of food. Why is it that the food that is the cheapest, most plentiful, and widely advertised is also the worse for us? We've gifted subsequent generations a lifestyle dependent on drive-thrus and corn syrup. There are some sparks here: the slow food movement and guerrilla gardening are two worth mentioning. I also wish Jamie Oliver well. But a tribe wouldn't attempt to change an entire industry overnight. It would start with small, manageable, personal steps to better yourself and then share the results with those like you.

Food almost inevitably leads into health care. Why be thin when we can pay for diet treatments? Why be healthy when we can pay for drugs to fix the problem? As Douglas Rushkoff shockingly (and rightly) points out if everyone got cancer it would be a big win for the country's GDP. We've organized our entire health care model around a cultural predilection for treating the symptom rather than preventing it.

Perhaps your tribe figures out a system of incentives that rewards preventive care. 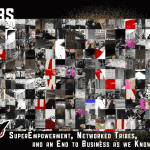 Studies show that throughout the last decade the smartest among us increasingly went into financial services rather than engineering. Our most capable are employed in wealth preservation for the richest 10% rather than in the creation of new products and services. And why not? You can work less, make more, completely fail and still get an average half-million dollar bonus after being bailed out.

It is inherent to our future infrastructure, our stability, and our ability to compete that this does not remain the case. Rally a tribe to that sees to graduating scientists and engineers. Introduce bright people to meaningful work.

(Brain drain due to engineering being perceived as a 'boys club' is also a troubling problem that is driving female engineers into the arms of Goldman Sachs.) 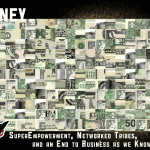 No, money is not the root of all evil and capital markets are a decent way of distributing goods and services to those who need them. However, a consumptive culture, one that demands continually buying more in order to stand still (in order to pay off debt) is a ponzi scheme of first order. A system whose success is dependent on infinite, unchecked growth is a system prone to failure. Why do we need to keep up with the Joneses? 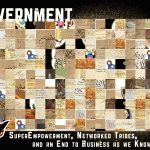 But the biggest problem is expecting the government - or any other top-down, holistic solution - to come in and save the day. In an era of multi-million dollar campaigns those funding them made their money with the way things are. They have no interest in seeing things change. We need to preserve the freedom to assemble our tribes around our shared interests and solve problems in our own ways. Everything else is just politicking and bluster. 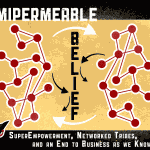 When you build your tribe never forget the mythology by which you assembled around. Whether its the belief that backyard gardens are essential or solar panels are the way to go these core beliefs are the filter by which you judge adopting other tribes' ideas. Sometimes an idea will serve the mythology and strengthen the kinship among your members. Other times an idea may oppose it. Those ideas need to be rejected. Belief is the semi-permeable membrane for evaluating concepts. 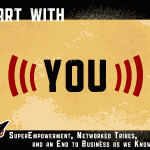 But it all starts with you. As Umair Haque recently wrote:

The real roots of the crisis aren't about liquidity requirements, reserve ratios, or monetary transmission mechanisms. No amount of regulation or rule-making can fix it. And mere 'growth' in GDP, as we're discovering, isn't a cure for it.

You have to care enough for a different world before you can rally those to help you build it. 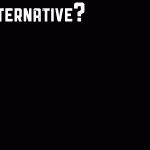 The alternative is enduring a job from 9-5 for a company that you hate so that you can go home and self-medicate on junk food, reality television, and status updates. It is a mono-culture stumbling along, in the dark, oblivious to what is going on, and being victimized by boom and bust cycles seemingly beyond their control. 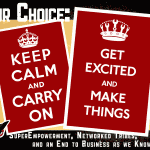 We have a choice. We can pretend nothing is wrong, persevere, and hope for the best. Or we can take action. Tribes do not represent systemic walled grottoes hearkening back to a simpler time for the sake of comfort. They can be the places where we turn first for hope, healing, and contentment. They can be the diversity we need that happily co-exist in self-sufficient ways.

Tribes represent the warm embrace of a community instead of single, disenfranchised, national target for a radicalized few. 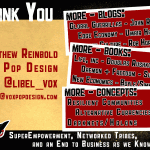 The recording from the evening featuring the less coherant ramble: